“Don’t you just hate it when you are casually trying to go worship in a Cathedral at 11:00pm and homeless men are blocking each door? UGH” -Acquaintance on Facebook

It’s a waste of money.

All they are is leeches.

Why don’t they get job?

Maybe you think these things maybe you post them on Facebook like one of my acquaintances. We wonder why the government has to support these people when charities and churches could do it more effectively. At least that’s my favorite right wing argument. The government won’t let them help the people out. It’s setting all kinds of barriers to keep charities and churches from thriving. Blah blah blah. Christians in this country seem to love playing the victim. Wah wah wah. I can’t take it anymore. All the excuses. If you follow my blog you’ll have heard it before, what are you doing to help them out personally? I don’t mean donating, though I encourage it. I don’t mean handing them a tract. I mean how are you being an example of Christ to these people?

I want to talk about the barriers we create for ourselves that get in the way of serving when it’s actually needed. Lately, I have been haunted by Matthew 25:31-46. I keep thinking that the people holding signs could be Jesus. But I am like everyone else, I have barriers in place. 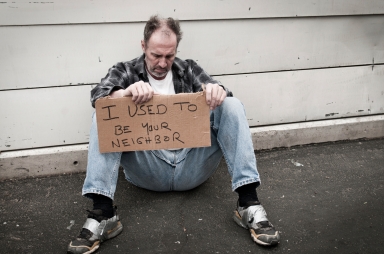 The first time I realized this, I was on my way from client to client and I didn’t have a ton of time. A couple days of work my hours start at 8am and end at 8pm. I had eaten breakfast but forgotten my lunch. I went through the Subway drive through, yes we have those. There was a man standing on the barrier with a sign that said he would work for food or shelter. And I looked down at my five dollar footlong with extra spinach, and thought “damn it.” I was actually thinking “I’m going to be late for work aren’t I?” Once that thought passed through my mind, I was so ashamed and I rolled my window down and called the man over to give him my lunch. When he had gone back over, and I started driving I began to pray for forgiveness. I begged Jesus to forgive me worrying about my schedule while someone was in need. That day i was late for work, and you know what, time went on. The family was very understanding and nothing came from it.

Worry that your money will be misused: This is why many people have a problem with the government giving to people. They hear the stories of people who use government programs to just be lazy or get some extra cash. Many people don’t want to give cash. I am among that group. My husband and I are on vacation presently. We didn’t go out for Valentine’s Day to save up so we could go out this week. On our way, there was a man holding a sign that said that he was homeless and needed some help. We debated quickly about giving him money from the window and stopping over to see if that’s what he needed. We both agreed that we’d be more than willing to give him a ride, a gift card for a restaurant, or take him to dinner with us. When we parked and walked over to talk with him, he’d joined another man in waiting for the bus. We offered them a meal or a gift card for anywhere they would like. They turned us down. They told us that we were a sweet couple and that there are people they take from and people they don’t. God was in that. Our money was not needed for something necessary, and so the people saw our willingness to help and refused to take it. The money that we have is not ours, it’s God’s. And if it gets misused I trust that God will take care of it. It’s my place to be open and willing to use it for God’s purposes, even if that means getting burned. However, cash can be too much of a temptation for those struggling with an addiction. Keep them in mind while you are considering giving.

Predatory Witnessing: Have you ever felt like you were being accosted by a religious group that didn’t know you were Christian? Did you ever feel that they had no real concern for you, only for getting their message across? Perhaps because of my constant church hopping I feel very outside of the church in this way. People in the new churches very often make it their first priority to make sure we know all the facts. But let me ask. Which is ore important: knowing about Christ or knowing Christ? We talked with those men for a while and heard some of their life stories, and shared some of ours. They knew that we were Christian and asked us to pray for them. Instead, we prayed with them. We didn’t go through the Bible soup to nuts. We didn’t feel lead to witness in that way. When we returned to our car we talked about letting them see Christ, rather than come from a preachy place and ruin our opportunity to be  effective.

You know my struggles with knowledge salvation instead of relationship salvation, if you’ve read any of my salvation series. I pray that I am not in any way inhibiting people from a saving ‘knowledge’ of Christ, but for me I feel lead to be the change I want to see. To me, being that example of who Christ was is far more important because if I can be a symbol through me, people may know Christ intimately. When I have these kinds of encounters, I end praying to God that I love Christ, and I beg that God will forgive me for being so outside the Christian community and I try to reassure God that distaste for the church is not distaste for God. I’m still conflicted, but when I do these these things I feel like I am a co-laborer with God. That perhaps Jesus is with me more in those times. I hope those people can see Jesus and not just me.

2 thoughts on “Annoying when the needy get in your way.”

What I Write About

From "Pieces" to "Peace"

Just trying to ask myself the hard questions and be honest about my answers.

Outside of the Sphere

A look at Christianity and other religions and their adherents from an agnostic view.

My isle of serenity

Documenting and reflecting on life

Stuff That Needs To Be Said

Reclaiming the Sacred
Thoughts of a Fundy Kid

Theology without the religion

A life for God not comfort

Fruit of the Narrow Way

This WordPress.com site is the bee's knees

.... following Jesus in the 21st century